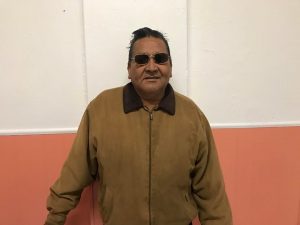 As he walks in to House of Neighborly Service, Antonio is welcomed by a warm, friendly atmosphere. He instantly smells the delicious aroma of a home-style cooking in the kitchen. He can hear the buzz from the Fellowship Hall where many of his friends are enjoying each other’s company, waiting in anticipation for lunch to be served and bingo to begin soon after.

Thirty years ago, Antonio journeyed to America in search of better work opportunities. Although he visits his family in Mexico often, Antonio has settled in San Antonio’s Westside community just three blocks from HNS, a place that has become his second home. Antonio has made lots of good friends in San Antonio, many of whom he met through HNS. Invited by a fellow neighbor, Antonio has been coming here for over 7 years now.

Antonio likes to spend his days reading and listening to the radio, but he says the best part of his day is when he’s at HNS. You will often find Antonio chatting with friends and sharing meals with his neighbors. He enjoys making new friends as long as they are kind, respectful, and “don’t say bad words.” The community at HNS is what keeps him coming back.

Antonio has formed meaningful relationships with HNS staff, as well. “They really care about us,” he says. He appreciates HNS’ efforts to truly understand and honor his community and is grateful for all the ways HNS has changed his life for the better.

Antonio shares, “I went through very difficult times, but with the help of HNS, they’ve lightened my load.” His diabetes and inability to walk long distances have become a major burden on him, but HNS provides valuable resources to alleviate his struggles. When he comes to HNS, his worries lessen.

Sign up for our E-newsletter and keep up to date with what we are doing.